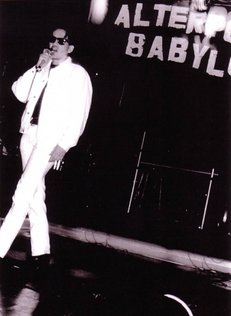 Tom Garretson is a multi-disciplinary Native American/Norwegian artist working in the fields of art photography, music, writing, theatre and performance art.  He is also a music industry and arts professional, having worked in these fields for the past 40 years.

AS AN ENTERTAINMENT INDUSTRY PROFESSIONAL

Garretson’s first employment was at the age of 18 in 1981, being employed by the alternative recording company MAI AS.   There he began to work with sales of albums and singles, and soon branched into learning marketing and promotion.  There, he was given responsibility of promotion for underground punk bands and labels, such as the English Rough Trade, Factory, Two Tone and Greensleeves labels.

From 1990 to 2004 he returned to work in the music industry after living in New York, gaining extensive professional experience as a producer, director, and as a consultant in marketing and promotion. He has been employed by PolyGram to head the labels Verve Jazz and Phillips Classics in Norway, bringing both labels into profit for the first time in that company's history; as Label Director for Sony Music he oversaw Columbia Jazz and Sony Classics in Norway and was responsible for the promotion and marketing of Christmas in Vienna III, which became the second best selling album of its release year; as a live event producer for NGM Ltd (London and Oslo) producing stadium concerts, musicals, and tours with internationally renowned classical and jazz musicians and singers such as Dame Kiri Te Kanawa and Shirley Bassey, among many others.

In 1998 he formed his own creative arts and management company WildStar World with the intention of using his considerable professional experience in marketing, promotion and contracting, in the interest of furthering his own and other artists' artistic endeavors. His first signing to his company was in the management of acclaimed artist Lydia Lunch, whom he continues to have a close association with today. He also managed the jazz singer Silje Nergaard's career, raising her status from "a dead artist" in the industry to becoming the best-selling pop-jazz artist in Norway, and the no. 2 best-selling jazz artist in Europe, after obtaining a recording contract for her with Universal Music. Universal Music also hired him as an independent promotion and marketing expert, resulting in three consecutive no. 1, platinum-selling albums for that artist. He also booked national and international touring for Nergaard, traveling to Asian countries and also spent three weeks in Germany for a National Representation Tour with the Crown Prince of Norway, HRM Prince Haakon, hired by the Foreign Service (Utenriksdepartement) in Norway to produce the tour in 2002. In 2004, he decided to take a pause from the music industry and devote his time to university studies and to focus on his own creative works.  During this period he worked as a freelance producer and also as a teacher of photography, while simultaeously continuing to manage Lydia Lunch.

In 2018 he set up his company Guttersaint, as a comprehensive arts and production company in which he continues to work as a freelance consultant and producer.  He also continues his personal and business management for the artist Lydia Lunch, going on 23 years of association with her.   Together they have created a new form of artist-management relationship, defying industry standards and succeeding by doing so.   His handling of the sale of Lunch’s archives to New York University garnered international media attention, and he continues to work with clients in archive sales or other creative business areas.

In the late 1970's as a teenager he was active in New York City rock/art underground scene based around the infamous nightclub Max's Kansas City. That scene's infusion of renegade art, literature, alternative music, theatre and film would have a lasting influence upon him. Simultaneously, at the age of 15, he was introduced to the music, films and art of the Weimar period by an elderly librarian who was a refugee from WWII Germany. This provided him with a life-long interest in German Expressionism, Surrealism, Dada, and in the films, theatre and art works of that period. Ultimately this resulted in the recording Sound and Smoke: The Music of the Berlin Cabaret Era, a project he instigated and produced in 2004, after receiving a grant to do research in Berlin. The CD received international accolades, with noted German historian and author of the period Peter Jelavich writing, "This is the best modern recording of Weimar cabaret music I've ever heard -- and I've heard a lot!"

Garretson received his education in Musicology, Composition and Poetic Drama at New York University, and studied Jazz Guitar at Loyola School of Music in New Orleans, though not completing his studies in the US because of lack of funding during the Reagan/Bush administration years. In 2010 he received his degree in Art Photography from the Oslo School of Art Photography (Oslo Fotokunstskole). Further, he decided to complete his studies in Musicology at the University of Oslo, while simultaneously obtaining a bachelor's degree in art history. He completed his master's degree in art history in 2016 there also, writing his thesis on "Dancing on the Abyss: George Grosz, Otto Dix, Christian Schad and the Influence of Cabaret Culture."

As a musician and composer, he performed with Burnt Sienna, Cosa Nostra, and The Flames of Paradise. He has produced numerous albums for Lydia Lunch, Einmal Kommt die Liebe, the Ophelia Orchestra, and as executive producer for Karin Krog, Silje Nergaard and Arve Tellefsen, as well as produced demos for Anne Grete Preus and the artist Tom Hugo.

As an actor, writer and performer he has appeared in his own avant-garde performances such as the AlterPorn Cabaret in Oslo, Norway, and in numerous Edward Weiss Off-Broadway theatre plays in New York. He has also performed his own dramatic poetry performances in the US, Norway and Italy. His photographing of transvestites was featured in the first episode of NRK TV's Jentene Fra Toten (The Girls from Toten) in 2010. In 2012 he played the part of "Diablo" in A Short Film About Incompetence directed by Matt Willis-Jones. He has also lectured at the University of Chicago in Paris in 2015 on “Art Versus Commerce: The Struggle for Artistic Independence”, and again in 2017 on “Berlin Cabaret is at the Heart of Transgression”, for their Transgressive Cultures Conference.  In 2019 he was asked to become co-coordinater & producer with Jack Sargeant for that conference, where he also presented his paper "On Reading Sade" and premiered his short film, "A Baroque Grotesque."   He also appeared that year on NRK P2 National Radio discussing Berlin cabaret as an art form.

His writings and photography have appeared in many magazines, newspapers and books in the USA, the UK and Norway. Most recently his photographs of Lydia Lunch were featured in the French television series Vernon Subutex, written by Virginie Despentes, and also in Pleading the Blood: The Art and Performances of Ron Athey (Intellect Books Ltd., 2013), The Gun Is Loaded (2008) by Lydia Lunch, and No Wave by Marc Masters (2007), both published by Black Dog Publishing UK. He was also a regular contributor of writing and photography to Paraphilia Magazine (USA and UK) from 2008 to 2013. He has exhibited in the USA, China and in Norway in solo and group exhibitions of his photography, also mixing performance art with photography and involving the public as active performers in his works.

In June of 2008, he was invited to perform with noted artists Annie Sprinkle and Elizabeth Stephens at the European Cultural Capital 2008 festival, in Stavanger, Norway. The performance caused a media riot and quickly became an exercise in media manipulation and self-righteous censorship. He also recorded, wrote and produced an album with Sprinkle and Stephens, entitled Love Art Lab, (Provocateur Media, 2008) using the pseudonym of "Guttersaint".   In August the following year, he was invited to perform his work "Burning Lights" at the Venice Biennale's Spanish Pavilion, for a live performance hosted by Sprinkle and Stephens, for their Eco-Sexual Blue Wedding to The Sea. He was also the event photographer. That same year he collaborated with the Iranian art photographer Adel Bonakdarpour under the moniker of Phototerroristas, in a work titled US THEM, using photography and performance to explore terrorism, the work of Dr. Stanley Milgram, and negative categorization and objectification in juxtaposed photographic images with confrontational, manipulative behavior. In 2011, he completed a three-year "Exquisite Corpse" art photography project titled "On Pleasure" with Lydia Lunch and the Chinese artist Joyce Lui Ying. In 2012, he performed a photographic performance art piece in his solo art exhibition at the Låvegalleriet, Galleri Lyshuset, in Skarnes, Norway, titled Name Your Poison.  In 2019 his solo art photography exhibition titled "Baroque Grotesque" featured at Galleri Schaeffersgt. 5 in Oslo, Norway.

Garretson continues to work as an independent artist working outside the mainstream, institutionalized art scene, in the disciplines of art photography, music, writing and performance internationally while being based in Norway.  He also advises clients in the arts and music fields and continues to work freelance as an arts and entertainment industry professional. 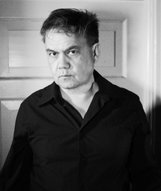