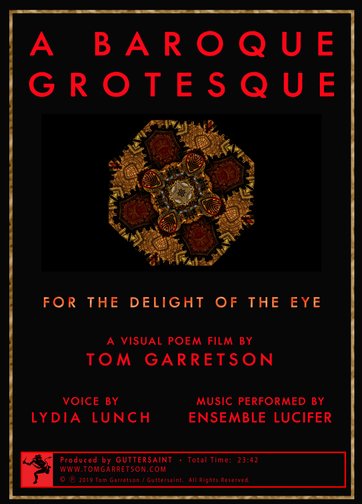 Screen shots from A  Baroque Grotesque (click for larger image)

A visual poem by Tom Garretson

A BAROQUE GROTESQUE is a visual poem using photographic still image works in the service of moving images, taking the form of a kaleidoscope creating constantly shifting and evolving images before the viewer.

A Baroque Grotesque’s conceptual base is a response to the aesthetic theories of philosophers such as Plato, Aristotle, Kant, Baumgarten, Baudrillard, Nietzsche, Danto, and many others.  The film does not attempt to copy their postulations but acts only as an aesthetic response.  The criteria and characteristics of the baroque era are used as the modus operandi and guidelines: pictures are infused with an emotional intensity;  they capture a moment of time, frozen; instability provides a key role, playing on diagonals, energy and movement, inviting the viewer to come closer into the work to become directly involved in creating their own meaning which may not be found in the work’s original intent; and finally, it is a play on the real, the idealized becoming grotesque, where interrupted contours fuse with the effects of light to direct the viewer’s focus into their own reflected psyche.  The Baroque fascination with trompe l’oeil feeds heavily into its influence in the work.  All of the original photographic works adhere to the Baroque aesthetic in the context of the photographic image but in non-traditional methods and forms, exaggerated, theatrical and extravagant. Pareidolia, the psychological phenomenon in which the mind responds to a stimulus to perceive a familiar pattern where none exists, is the basis of the viewer’s experience.

Accompanying the film is the poem “Artaserse” written by Garretson and read by the noted artist Lydia Lunch.  The music composition and soundscapes were written and recorded by the artist and performed by the Ensemble Lucifer (which he is a member of), using familiar passages from baroque music works which only hint to its original origins.  Four movements built around the classical elements of water, air, earth and fire guide the listener to the visual fantasia of music and images constantly manipulated, cut-up, and transformed over images in movement as well as in depth of dimension, enticing the viewer with a wholly immersive aesthetic experience.  Its purpose is simply to delight the eye.